I took the advice I got at Orycon37 to heart and had some bookmarks printed up (as well as a couple of other things, like the socks, and some things that haven't arrived yet). The bookmarks just came in from the printer last week and the socks arrived on Friday. I had the bookmarks done at www.24hourwristbands.com so that I'd be able to give some away at NewCon, in January. Unfortunately, NewCon informed me (after the bookmarks arrived) that they are all sold out of vendor space. Their artists' alley is also closed, so I guess I won't be giving anything away at NewCon. Dang. I know it's not a personal rejection, but it still feels like a black mark on the month. With that denial still stinging, I immediately went to the Wizard World Con website and booked a table in the artists' alley. Surprisingly, they not only had room, I even got a corner table. Wizard World Con will be February 19-21st, 2016, and I've asked my friend (and the artist who drew the cover illustration for Fish Wielder) Herb Apon, if he will join me at my table. He has tentatively agreed and thinks he may be able to get another extra special guest to join us as well. I'll hold off on the name until I hear whether he'll come or not.

I am also going to send off my application for a table at Westercon 69 today, but that one's not until July. The book won't be ready in July, but I'm hoping I may have some advanced copies or something. I should also have lots of other goodies to hand out, in addition to the posters, buttons, stickers, tattoos and bookmarks.

In Blurbquest news, I haven't heard anything back from either They Might Be Giants (whom I reached out to through their management group), or from author Nick Harkaway (whom I contacted through Facebook). TMBG hasn't responded in any way, which is sad, but at least they haven't read the book and then decided not to write a blurb. Mr. Harkaway, on the other hand, has been sent a copy of the book...so the fact that I haven't heard anything back could be bad. I know he is very busy writing his own book at the moment, so I don't want to bother him by checking in, but it is a bit agonizing waiting to hear back and worrying that if he has decided not to blurb Fish Wielder, I may never hear anything. I suppose not knowing is slightly better than being rejected definitively, but not by much. In other Blurbquest news, I also wrote to Cressida Cowell, who wrote the excellent "How to Train Your Dragon" series. I contacted her through her website and asked if she'd consider writing a blurb for the book. She wrote me a lovely email back this morning, but declined to do a blurb. She told me she never writes blurbs for anyone because she gets requests all the time, often from people she knows, and it's awkward to have to decline anyone because she doesn't like their book, so she just doesn't write them for anyone. I totally understand that position. She was very nice about it and even said, "If it's any consolation, I've never had a quote from another writer on the covers of any of my books, and they still did well, even before the movies came out...so although it might be a nice thing to have, it isn't essential." Then she wished me luck with my book. Nice lady and a very engaging writer. I just finished reading the last of the "How to Train Your Dragon" books with my ten year old and we found it both very entertaining and even moving. I'd recommend them to anyone with kids.

On to the "landmarks" bit. I signed a contract with Fiery Seas Publishing on November 10th, 2015. That makes things officially official now! WHOOT. And after that, I got assigned my very own editor. I am waiting to hear her thoughts on the manuscript. Rest assured, I will keep you all posted on how that process goes. So far, I have only had great experiences with my editors, so I'm hoping to continue the streak.

Oh, and I am investigating having socks made. 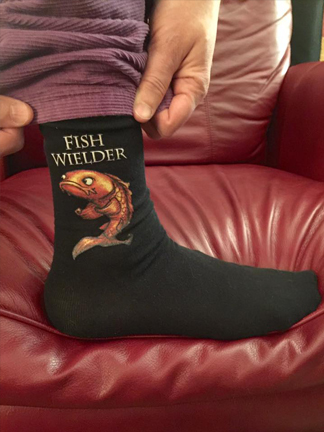 That's all for now. I hope everyone is having an excellent holiday season so far.
Posted by Jim Hardison at 3:49 PM 2 comments: