Well! I just closed out my first experience running a table at a science fiction and fantasy convention. What an awesome event, and what fun and interesting people! I've done several signing events for my graphic novel at comicons before, but those were organized and run by Dark Horse comics, so I didn't really have to do anything but show up. This was very different. I was running a table in the "fan" section because, of course, Fish Wielder isn't actually out yet, so I didn't have any books to sign or sell. Instead, I did a promotional blitz. I gave out almost 200 buttons (mostly of Brad), tons of stickers and temporary tattoos, and dozens of Fish Wielder posters. I also gave out a bunch of copies of my graphic novel, The Helm, so that folks who couldn't see my book yet could get a taste of my writing style to see if they might be interested in the book when it comes out in August of 2016.

Overall, I'd have to say that the event felt pretty successful. Lots of folks seemed intrigued by the book, dozens of people gave me their emails for a Fish Wielder newsletter and I had a lot of fascinating conversations with warm and generous people. And a few delightfully odd ones! I also got to try out potential elevator pitches of the book, and I was given some excellent advice to help me do even better next time.

For those of you considering doing something like this in the future, here were some of my learnings:

1. Bring a big roll of painters' tape. You just never know what you might need to tape, but believe me, there will be things.

2. Bring a bowl of candy to give away! Lots of people stopped by to snag a snack and stayed to chat about the book.

3. At least at this kind of con, most people didn't want to have to lug posters around--so smaller, easier to carry swag might be better. It did help that I brought a big supply of rubber bands to keep the posters rolled.

4. Buttons seem to trump everything else (even free graphic novels).

5. Small cards--or better yet, book marks--with all the important details about release date, publisher, publisher website, my website, etc. would have been very helpful. Several people in the book selling business stopped by the table and gave me this bit of useful advice.

6. Everybody at the con seemed to be collecting ribbons to stick on their badges--so ribbons might have been good too.

7. Put out a pad of paper for people to write down their email addresses. I had intended to do that on my computer, but there was no power available. And make sure you have a pen right beside your pad, and a spare pen in case your first pen mysteriously vanishes.

I also applied a bunch of temporary tattoos at the table, so that there was an army of fish wielders walking the con. Here are a few of the brave folks who will be wearing Brad for the next week or two: 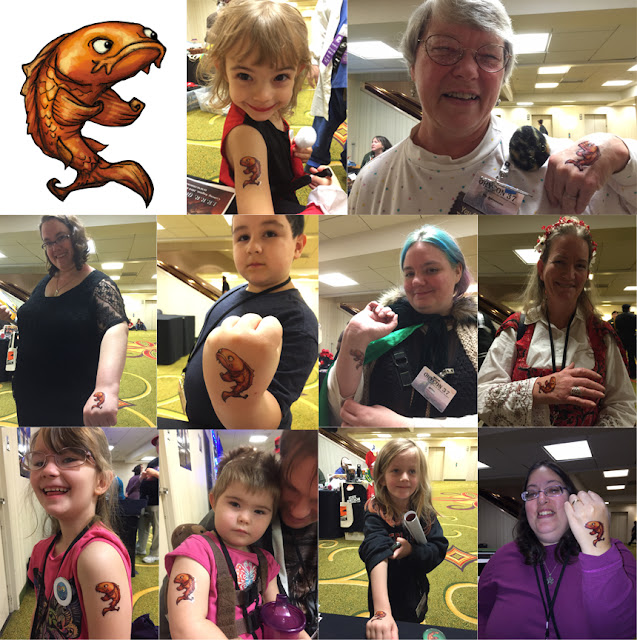 Posted by Jim Hardison at 3:40 PM No comments: 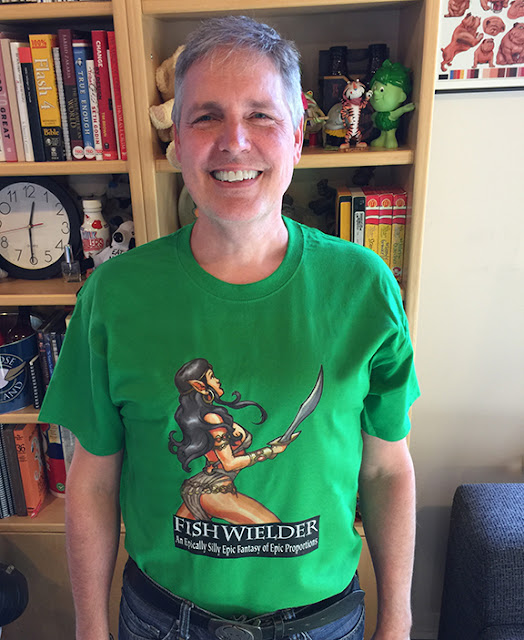 Posted by Jim Hardison at 3:36 PM No comments: