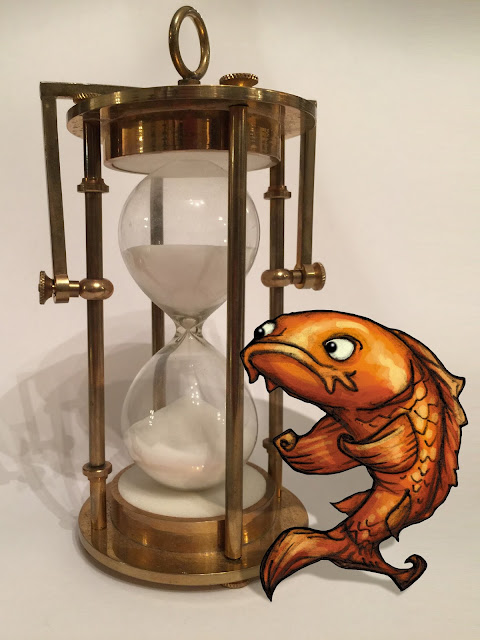 Well, this being the 23rd of July, 2016, the release of Fish Wielder is now exactly one month away. The COUNTDOWN has begun! I must say that, similar to how I might feel on seeing the timer begin to tick down on an explosive device, I feel an odd mix of excitement and trepidation.

The excitement is because, after more than a year and a half since finishing what I considered the "final" draft of the manuscript, it's finally going to be a real, published book. I've got to say that this publishing thing took A LOT longer than I expected it would. I knew it wasn't an overnight thing, the way self-publishing would be, but I didn't fully appreciate how long it would actually take. I'd love to hear from any other writers out there about your publishing experiences and how long your journey from manuscript to book took.

But, after all the waiting and preparing, I'm just one month away from the moment when people will actually be able to read the book and decide whether they like it or not! In a lot of ways, that's kind of the point of publishing a book, rather than just writing it and sticking it in a box under your bed. You want to share it with readers. I'm so excited to hear what people think about it and see whether they find it funny and enjoy the story.

And that's where the trepidation kicks in big time. They may not find it funny, or may not think it's a good story. Now, after months and months of telling people what it's going to be like, they're going to actually read it and decide for themselves.

Want to see what that feels like?
OK, with that out of the way, here's what's happening now, as Fish Wielder enters the final pre-published stretch.

First, I was up until about 4:00 AM this morning filling out author interviews. My wonderful publisher, Fiery Seas Publishing, emailed me a bunch of interviews to fill out for various websites and blogs. I find interviews fun but awkward. It's always weird talking about yourself (it feels so self-centered and braggy), but it's also really interesting to hear the questions that other people have about your book and your writing process. I also find it surprisingly useful to have to think about those things enough to be able to answer the questions. Why did I decide to write and epically silly epic fantasy? How did I get interested in writing and why do I do it? What was I trying to achieve with my characters?  And then there are more specific questions about things I've already thought about a lot. What's the magic system on the mystical world of Grome? What it the political climate there? What meaning did I ultimately hope people would draw from the book?

Next, my publisher asked me to pull at least ten excerpts from the book that can be used to promote it. These were supposed to be between 300 and 500 words each. I didn't think that would be a hard thing to do, but there are actually a fair number of twists and turns in the Fish Wielder plot that made selecting excerpts a little tough. I couldn't pick any passages that gave away plot developments or could be interpreted as spoilers. So, it actually took me a whole day to identify excerpts. I actually started by picking out about twenty of them and then narrowed it down to fifteen that I sent off to my publisher. I figured that would provide a little flexibility.

Beyond those things, I'm also working on potential blog posts to use on my "virtual book tour" which is supposed to start up sometime on or around the release date of the book. Included in those posts would be things like interviews with the main characters of the book, selected quotes from the book and funny or interesting material related to Fish Wielder or writing in general. In other words, I'm having to do a bunch of writing! While that's totally cool and fun, it has been cramping my writing schedule just a bit for the next book in the trilogy, A Fish Out of Water. This is, of course, my own damn fault. My publisher warned me, shortly after I signed on with them, that I should get busy immediately on the sequel because I'd find myself pressed for time once the book was actually released. And did I immediately jump into the writing? NO! I was too buys doing other promotional things and feeling like I had plenty of time!

And here's another funny thing I didn't expect. Once I actually dove into the sequel writing process, it was a weirdly different than writing the first book. With the first book, absolutely anything was possible and all I had to do was follow where the story took me. With the second book, while there's still a good bit of that going on, I also have this little voice in my head that's comparing the new stuff to the old stuff. Am I capturing the same tone? Is the voicing consistent? Am I relying too heavily on jokes and tropes I used in the first book? Am I not using them enough in the second one? Writing a sequel is adding a whole new level of second-guessing to the process. I say a whole new level because my writing process always involves a fair amount of second guessing to start with. This just spreads a thick layer of frosting on top of that.

And one last thing. Now that I'm down to the last month, I hope to post here at least once a week, maybe more. Even that is a cop out. I had decided to post here every day for the last month, but when I just went to write that down, I found it a heart-stopping commitment and wimped out with the "at least once a week" thing. Then I tried to salvage it with the "maybe more" bit at the end.

OK. Time to run and pick up the pizza for dinner!
Posted by Jim Hardison at 7:02 PM